You are here: Home / ABOUT 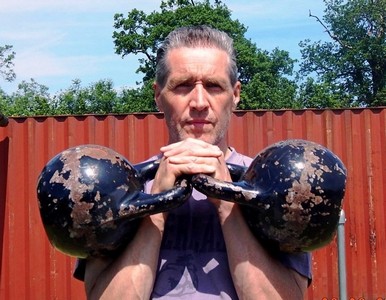 Kettlebell World is run by Roy Chatterton. A Personal Trainer and Kettlebell Instructor for 17 years, who resides in Borehamwood Hertfordshire.

I have spent nearly all of my life in sports and fitness. Playing and competing in soccer, martial arts and athletics on a casual basis.

But it was’nt until 2002 that I decided to do what I enjoyed doing and become a Personal Trainer / Fitness Coach. After spending years working in many different industries, ranging from aircraft, hotel & catering, reproduction furniture, photocopiers, sports promotion to name but a few !

As I mentioned above I was very active in multiple sports, without having much in the way of focus, and dedicating myself to the cause.

But a pivotal moment for me came in early 1982, that led me on the path of discovering the importance of applying the right attitude and application from the start.

This is when I joined Haringey Athletic Club  and trained with them for next 9 years, training and competing in Sprinting and Pole Vault.

In the 1980’s Haringey AC was regarded as the most successful club in the UK / Europe,and produced and attracted a large number of talented athletes who competed regularly in the Olympics and World Championships etc.

It was an amazing place to be part of, and everyone fed off of each other. Divulging different training techniques, and constantly enforcing and motivating each other to give that little bit extra.

Before I joined Haringey, I had a lot of natural ability in soccer. But like so many others in a similar position, I had a lazy attitude and I was indisciplined.

And because of the nature and culture of soccer then, and even to an extent today. It was not always the most supportive of sports. Given that there was so much competition for places in teams.

Sometimes it even depended on who the managers were. As it did’nt always matter whether you were good, bad or indifferent !

All that changed though, the moment I found myself in the company of a group of gifted club sprinters.

Many had faster twitch muscles in their little fingers, than I did in my legs. And so from that moment on I went into overdrive, in a quest to keep up with them during training.

And although I did’nt always have the upper hand on the track, because of the talent I was up against. It most definetley helped me forge and develop an extremely strong mindset in pushing harder in all areas of strength & conditioning.

This resulted in me achieving an above average strength and fitness, and getting into incredible shape ! >Where am I going with this ?

The moral of my story is, that once you have crossed the point of no return or gone beyond your comfort zone. There is no turning back. And you plant and programme such deep and powerful seeds mentally, that you find it difficult to contemplate working at your original threshold.

You therefore instinctively know what it takes to get where you want.

Having the right attitude and application at a high level from the start, is an integral prerequisite in achieving your fitness goals. And these attributes can dramatically materialise within a very short period of time. If the desire is there.

Especially when you have the right people and the right environment behind you, like I did at Haringey AC.

So whether you are looking to achieve weight loss, fat loss, general fitness or want to excel at a higher level in your chosen sport.

Kettlebell world will help you get there !

The Kettlebell, And How I Became Part of Its Fitness Revolution.

I also decided that I needed to find something that was very different. But yet highly effective in accelerating lean muscle growth, strength and general fitness levels.

A great place to start was a bookshop I used to frequent in Charing Cross Road, London, called ‘Sportsline’. Which unfortunately closed, due to the advent of the internet.

At the time,they specialised in sourcing, stocking and selling nearly every conceivable sports and fitness book in the world.

And if they did’nt  have it, they would get it.

Needless to say, because the books were obtained mostly from abroad, and included a lot of eastern european fitness methodologies and blueprints, they were not cheap.

But while browsing through their extensive collection one day, I came across one particular book written by a fitness trainer by the name of Pavel Tsatsouline.

Pavel was from the former Soviet Union, and a former trainer to the Russian Special Forces (Spetsnaz) and was now based in the US.

The book contained some excellent ideas and information. Ideas that were very different  from a lot of the training methods I was used to seeing.

Yet I decided not to buy it, (a) because the book was only 50 pages long and (b) it was very expensive.

However,I made a note of his name, and when I got home googled it into my desktop computer.

The Internet in 2002 was very young back then, and so fitness websites were few and far between.

At that time the word Kettlebell was totally alien to me, and even more so to anyone else you spoke to.

But after doing some research on the benefits of using them. I decided to book up for Dragon Door’s June 2003 RKC in Minneapolis, and spent  a week being taught by some of the best Strength and Conditioning coaches in the USA.

Who, together with Pavel eventually went on to become major guru’s of the whole kettlebell revolution. 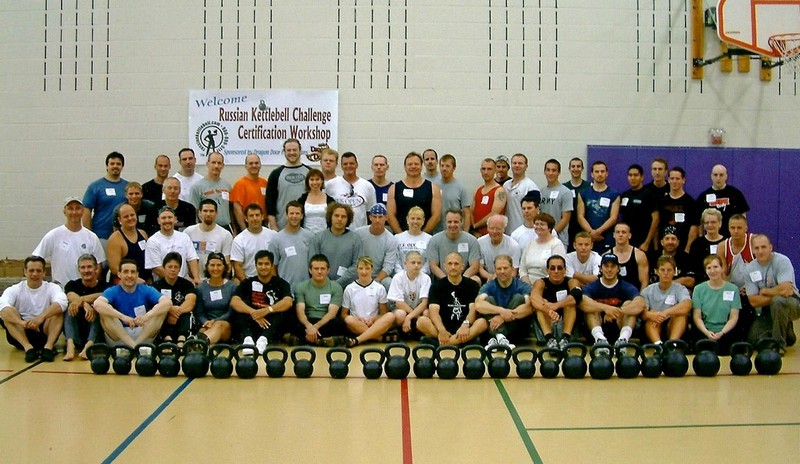 Myself and another trainer Lee Hadden were the only 2 Brits among 50 other attendees.

The majority had travelled from all over the USA, and the group comprised of people from all walks of life and activities. Participients that included power lifters, martial artists, fitness enthusiasts, stay at home moms, businesmen and women etc etc.

Before then only 2 other Brits had attended and achieved an RKC in the small number of previous certifications Dragondoor had held.

On returning to the UK, I later discovered that there was only one company based in the UK who were also running Kettlebell Certifications. And they only had 4 other trainers certified to teach Kettlebells.

Therefore I found myself in a very small club of just 8 First Generation trainers and Instructors, officially qualified to teach Kettlebells in the UK for the first time !

I purchased 4 kettlebells from the states,and began to train out of Holmes Place Health Club Borehamwood. Introducing members and staff  to their unique health and fitness benefits.

Although a new concept to a lot of people, they had in fact originated 100’s / 1000’s of years ago, but were now on the verge of a major renaissance, as word began to spread throughout the other branches.

In 2005. kettlebells appeared on a programme called the ‘Biggest Loser’  which catapulted them into the mainstream.

A year later Virgin Active bought out Holmes Place, and added kettlebell’s to the class format in all their clubs.

From then on, interest in kettlebell training began to grow and grow, and the rest they say is history !!

WHERE TO FIND US